As of October 4th, Peruvian Airlines is no longer operating in Peru. The company announced its decision via an official communication, which has since been circulated across every medium imaginable.

And as of November 13, 2020 people have until December 22, 2020 submit their request for reimbursement for their lost flights. Find out more below.

The shut down will have consequences for travelers in Peru, as well as the many Peruvian residents who used the airline regularly. The news came as a real surprise since no major incidents had occurred. So, what happened?

What Happened to Peruvian Airlines?

The company blames the Peruvian government, specifically SUNAT, the tax collection agency. At the heart of the dispute was the cost of two planes that the airline had imported to use in Peru.

Anyone who has tried to have a package sent to them here knows that Peruvian import laws are unfriendly to say the least. Not only could there be significant taxes on the type of item that you’re importing, but you’ll also have to pay Peruvian sales tax on those items. Even though you might have paid sales tax abroad when you ordered the item, you still owe Peru for a sale that didn’t happen in Peru.

With an 18% sales tax, miscalculations can be quite costly. That appears to be the case here. The airline claimed one price for the two planes, while SUNAT claimed they had a different cost. Ergo, there was a difference in the sales tax to be paid.

Both sides stood their ground until a customs court ruled in favor of SUNAT. This let SUNAT freeze Peruvian Airlines’ accounts to reclaim what the court deemed theirs. This happened on September 30th, 2019.

From there, a domino effect occurred. Without cash flow, they couldn’t pay for their fuel, also provided by the government’s oil company PetroPeru. No fuel, no flights. No flights, no income.

The company’s statement claims that this single interruption in services caused a drop in sales as travel agencies and websites were less likely to recommend the airline due to the uncertainty.

Although we often think of airlines as being these wealthy corporations, in reality they are very fragile. They typically operate on low margins and have to make massive purchases (new planes aren’t cheap) to stay competitive. If the bank account runs dry, even for a bit, the whole enterprise can collapse.

And that’s what has happened. So, where do we go from here?

What if I Booked a Flight on Peruvian?

If you were planning a trip to Peru and had booked a flight on Peruvian Airlines to travel to another part of the country, you will be able to get your money back. However, the company has outlined a very specific process for this.

First of all, if you bought your tickets through a travel website like Expedia or Travelocity, or a travel agency, then you must contact them in order to get your refund. Since they charged your credit card, it’s up to them to refund you.

If you bought your tickets directly from Peruvian’s website, or through an office in Peru, you should have already received your refund. However, some sources have indicated that some flights may not be refunded until the day the flight was supposed to take place. You can contact the company directly, as they still have an office, at 716 6000.

How To Get A Refund

By resolution, Indecopi’s Senior Management provided free online registration tool for affected consumers to request a refund on their tickets from. Passengers will have until next December 22. After that date, they may submit their applications to the bankruptcy authority directly on their own, free of charge. The reimbursement of tickets (request for recognition of credits) derived from a consumer relationship subject to a pronouncement by the consumer protection authority, will not be subject to payment of the processing fee.

Considering that, to date, Peruvian is subject to a bankruptcy procedure, which prevents it from making the reimbursement directly and immediately, each affected consumer, by mandate of the SPC, may submit to the Bankruptcy Procedures Commission (CCO) of the Indecopi a request for recognition of your credit (that is, the request for reimbursement of the value of your ticket).

To do this, customers must fill out the online form made available by Indecopi, and have until Tuesday, December 22, 2020, in order to acquire the status of a timely creditor, by entering the following link: Get My Refund.

After that, the Indecopi CCO will proceed with the evaluation of said requests, which will be completely free to the consumer from any administrative processing fee.

Consumers should note that, after December 22, 2020, affected consumers who did not register using the online form and benefited from the mandate of the SPC, may directly submit their applications for credit recognition to the CCO of Indecopi, on their own and again free of administrative charges.

Peruvian provided competition to certain parts of Peru, such as Ilo and Jauja. Now only LATAM flies these routes. But if LATAM or Avianca seem too expensive to you, there are other options out there.

For flights to the jungle, consider Star Peru, which operates in cities such as Iquitos, Pucallpa, and Tarapoto. 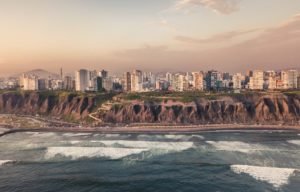